Historical Highlights of Hingham, Massachusetts, Incorporated 1635
Hingham's roots go back to the earliest days of European settlement in the new world. The first Europeans arrived in 1633, calling the area Bare Cove. Here they found the Massachusetts Indians, a tribal branch of the Algonquin Nation. Relations between the indigenous people and the settlers were friendly with the Native Americans providing food and teaching the settlers how to grow corn.

The first significant European settlement was established in 1635, when the Reverend Peter Hobart arrived with his followers from Hingham, England. In that same year, they renamed the town "Hingham," and it was incorporated as the 12th town in the Massachusetts Bay Colony. By 1665, the Massachusetts Indians, weakened by plague and attacks by the Abanaki Tribe, granted the land "from the beginning of the world" to the settlers. This deed, bearing the mark of the Sachem Wompatuck, hangs in the Hingham Town Hall today. 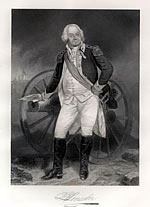 In 1681, Hingham's 140 families raised the money to construct the Old Ship Meeting House. Still in active use, it is recognized as the oldest wooden church structure and the oldest church building in continuous use in America. During the American Revolution the population had reached 2000. Approximately 600 men from Hingham served in that war. The period following the war was a tranquil one in which the economy flourished. Fishing, farming, shipping and milling were the primary occupations. In 1784 the Derby School, later Derby Academy, was established as the first co-educational school in the nation. The Academy has moved to new quarters, but the original building now serves as the headquarters of the Hingham Historical Society and is used for meetings and social function. 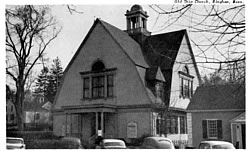 In the 19th century, Hingham's fishing industry peaked with 65 fishing vessels and the fourth largest mackerel fleet in the country. It was such an important port that for 45 years there was a customs house marking Hingham as an official port of entry to the U.S. By the Civil War, the population had grown to 4,000, 854 of whom served in the war.
On July 7, 1899, Seaman Herbert Lewis Foss was awarded his country's highest honor, The Congressional Medal of Honor, for his extraordinary bravery and coolness under enemy fire. He became Hingham's only Medal of Honor recipient. Read more about Seaman Herbert Lewis Foss.

The 20th century saw war change the face of Hingham dramatically. In 1906 the Navy built a "Magazine" on 697 acres in North Hingham to store ammunition for the North Naval Reserve Atlantic Fleet. In the South End, 500 sailors were stationed at "Camp Hingham." Again during World Ware II, Hingham was called upon by the Navy. Seven square miles (now Wompatuck State Park) were used for a huge ammunition depot. Then in 1942, 150 acres at the harbor were taken for a shipyard to build convoy ships (Destroyer Escorts "DE's"). This marked the first mass production of ships as Hingham turned out 16 at a time in a huge effort. At the height of production, 24,000 people were employed working around the clock, 7 days a week.

After the war years, there was an urgent need for housing and schools to accommodate returning service men and the resulting baby boom. The housing stock continued to expand. But by the 1970s the town focused on acquiring land to preserve as open space. This concern for the environment and quality of life remains a priority in Hingham today.

Primarily a residential community now, Hingham is connected to Boston by highway, bus, commuter boat and by the restored Greenbush commuter rail line. It has multiple recreation sites on fresh and saltwater and within parkland. Hingham today looks to the future with an eye to preserving its rich history, so evident in the remarkable architecture preserved in both public and private buildings, and in the protection of its open space. 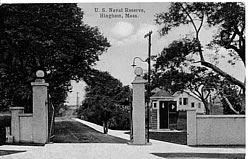